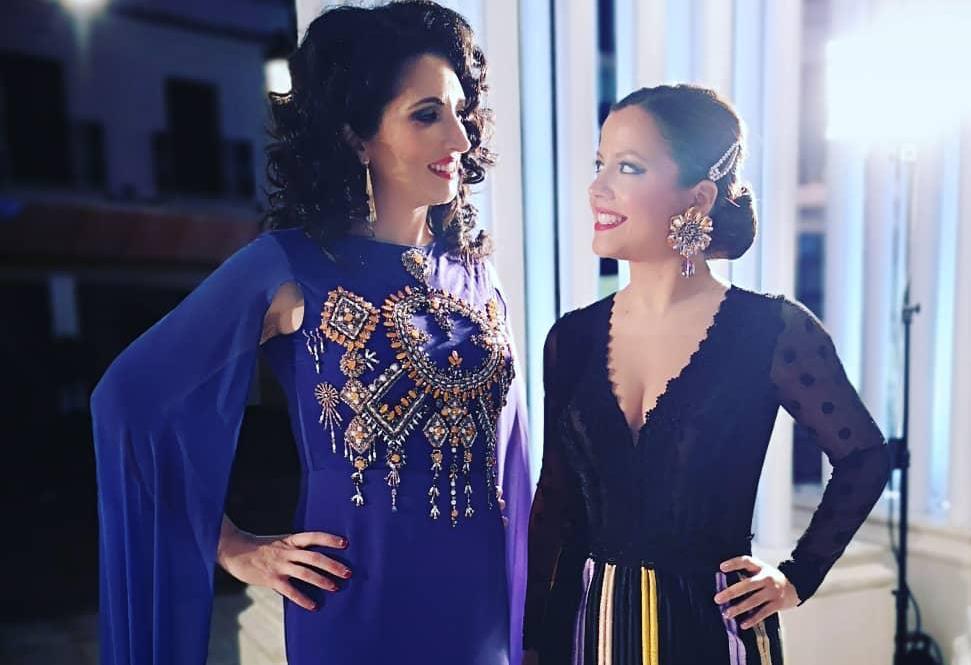 Hey, everybody! How was your week? We come back another Thursday with a new post in our blog, this time it’s a different post. We are delighted to tell you that we dressed Alejandra Almendro and Maria Canea to give the 2020 in the special New Year’s Eve of Canal Sur Television.

We would like to tell you a little more about these two great Andalusian artists who chose Nuribel to shine on this great night in Almonte.

Alejandra Almendro, a native of Almonte, is a flamenco singer and has dedicated her entire life to promoting this art form, which is so typical of the south. With her work, perseverance and dedication, she has been unanimously elected as president of the Peña Flamenca de Almonte, which has more than 35 years of history and in which they have never before named a woman to preside over this entity, so the pride for her is doubly immense. This year she has been the winner of the Canal Sur carol, together with her colleagues María Canea and Jerónimo Segura.

For the big night of the 2020 Bells, Alejandra chose a long dress in electric blue with gold rhinestones on the chest and spectacular cape sleeves from our Couture 2020 collection.

Our other great artist, María Canea, was born in Huelva, and has been dancing practically since she was born, as she began her flamenco dancing career when she was only 3 years old. Among her greatest awards are the first prize at the 6th Youth Dance Competition by the Cristina Heeren Foundation at the Gran Teatro de Huelva (2005), and second prize at the “El Desplante Minero” Dance Competition at the Festival Internacional de La Unión de Murcia in 2009. In February 2019, he received the Andalusian flag at provincial level, an award for his long career even at such a young age. Currently, he has just started a tour in Spain with the great violinist Paco Montalvo. Maria chose a very original and elegant dress for this special night. It is a long dress, straight cut but with a great fall. The upper part, made of lace and transparencies, combines polka dots on the sleeves and back with lace and uve neck on the front. The lower part of the dress, has a pleat that mixes colored stripes with black background.

Finally, we would like to thank our partner store in Almonte, Victtoria (c/ Venida de la Virgen, 15. Almonte), who has been commissioned to dress these great Andalusian artists with our designs.

We’ll read about it next week with new designs for this Christmas. Have a great week!